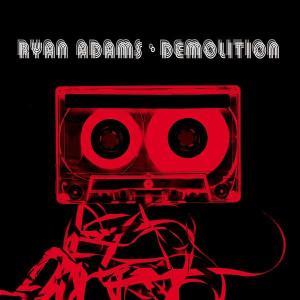 Ryan Adams doesn't have an "off" switch. Talking, drinking, singing - he's done when he says he's done and no sooner. And that's especially true when it comes to writing songs.

To Ryan's fans, his prolific output is no secret. They know that new songs are constantly pouring out of him. And to those fans, the collection you hold in your hands is the stuff of legend. "Demolition" gathers thirteen songs that were recorded over the course of ten months (December 2000 to October 2001) in five separate sessions. Each session resulted in an album-length set of demo recordings, and Ryan had only good intentions for these songs. "I want to be more responsible about not letting go of songs," he told me in Nashville last summer. "I was always creating and running, now I want to create and build." But what's a poor record company to do?

After sitting on stacks and stacks of tracks for over a year - with rumors flying that the plan was to put them all out as a box set - the decision was made to assemble a sort of "Greatest Hits" from the unreleased songs. Not quite Ryan's "Basement Tapes," not exactly his "Odds and Sods," "Demolition" is a retrospective of a high-speed year in the life of a rising star - of days between gigs ("Tennessee Sucks"), of matters of the spirit ("You Will Always Be the Same," "Hallelujah"), and, mostly, of loves come and gone. Like such artists as Neil Young and Joni Mitchell, who constantly challenge their audiences with perpetual change, Ryan's attention-deficit approach to musical genres can be pretty staggering: "Demolition" careens from tough garage rock to weepy, wordy heartbreakers to down-home pickin' and grinnin'. And as soon as one phase is done, Ryan says, "I usually try to do the thing furthest from the last thing."

Two things to keep in mind: one, every song on this album is an unretouched demo, cut live in the studio with no overdubs or fixes or tweaking added later; and two, these were all written and recorded in addition to Ryan's Lost Highway debut "Gold" - one of the ten best albums of 2001, according to the Village Voice critics' poll - and on top of non-stop touring around the world, plus other sessions with the likes of Beth Orton and Counting Crows.

The earliest tracks here come from something originally called "The Suicide Handbook" (which Ryan took to calling "Commercial Suicide" as it grew long enough to fill two discs). Ryan, accompanied by lap-steel wizard (and former Bob Dylan sideman) Bucky Baxter, recorded 21 "miserably sad" songs in Nashville - he says he "imagined the whole record as just me and a guitar and a string section." He then veered into more of a classic-rock direction, resulting in "Gold"; six of the "Suicide" songs made the cut, including the eventual single "Answering Bell," but such forlorn delights as "Dear Chicago" and "Cry on Demand" are only now seeing daylight.

Of course, as soon as "Gold" was finished, Ryan went into full freak-out mode. Inspired by a "mind-boggling" show by his friend Alanis Morissette at Los Angeles's El Rey Theater in May 2001, he immediately started writing again, called up producer Ethan Johns, and was back in the studio that same week. A full album was recorded and mixed in two days - which is why this batch of songs was titled "48 Hours." The sound he was going for was "a country-folk thing like 'John Wesley Harding' or 'Workingman's Dead,' with some shitkicking Merle Haggard stuff in there" - the glorious "Hallelujah" and the irresistible, twangy "Chin Up, Cheer Up" certainly make for a dramatic contrast with the "Suicide" songs.

Ryan's touring musicians took on an alternate life as a garage band called the Pinkhearts - he even flummoxed the crowd at Austin's 2001 South By Southwest festival by turning his much-touted showcase into a raucous Pinkhearts set. Back in Nashville, with CDs by Sonic Youth, the Stooges, and Nirvana propped up on the mixing board for divine guidance, the band knocked out dozens of Replacements-style bash 'n' pop songs over two separate sessions. "It's really liberating for me to cock my hip to one side and sneer sometimes," says Ryan. "Sometimes it just feels good to pick up a guitar and be an idiot. It's not Leonard Cohen or Tom Waits, but it rocks." But the Pinkhearts songs (which make up almost half of "Demolition," a full six selections) are more than just dopey punk workouts - bittersweet, tightly-constructed songs like "Gimme a Sign" and "Nuclear" stand with Ryan's best work.

After "Gold" was released, Ryan returned to the studio yet again - this time in Stockholm, Sweden, one of his favorite cities. The most recent track on this collection, "You Will Always Be the Same," is an intimate, mystic two-and-a-half-minute gem.

"Demolition" is being released just as Ryan goes in to record his official follow-up to "Gold," but don't expect him to stay focused on one project for too long. Who the hell knows what comes next? "I don't think I should slow down until it's time to," he says. "Then I can always go back to my old songs."