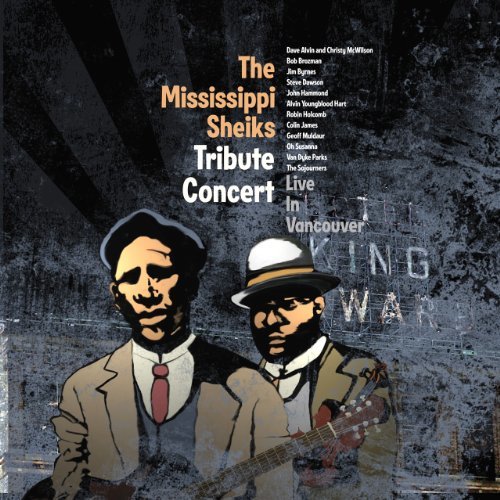 lieferbar innerhalb 1-2 Wochen
(soweit verfügbar beim Lieferanten)
-10%
EUR 18,99**
EUR 16,99*
* Ländercode:Keine Angabe;Laufzeit:Keine Angabe
Gritty, unwashed and real. The blues saved American popular music from the saccharine whitewash of the 1950’s. For young people growing up at that time, the blues lexicon of hasty retreats out the back door, wife stealing preachers and men who solved arguments at the end of a smoking gun offered another way of seeing and experiencing life. Nearly fifty years later, the blues has lost its bite, and has been used to sell everything from new cars to presidents. Shifting uncomfortably under the weight of its restrictive forms and cultural baggage, it’s a musical form that’s long been in serious need of an overhaul. But, there was no indication that Steve Dawson was fazed by the challenges he faced producing his Mississippi Sheiks tribute CD and the two concerts that celebrated its release as he collaborated with both blues veterans and artists from other genres to share their love for the music with a rapturous crowd over a March weekend in Vancouver.

‘Things About Comin’ My Way’ — the album that paid tribute to the gritty music created by the Chatmon family during the 1930’s and 40’s — served as a template for the concerts, but Dawson couldn’t resist shaking up the format a little to allow for elements of spontaneity and surprise. To this end, he corralled the talents of Wayne Horvitz on keyboards, Matt Chamberlain on drums and Keith Lowe on bass – the same session players who played on the album — to provide the bedrock sound for the concerts. The renowned Victoria fiddle and trumpet player, Daniel Lapp was also recruited to flush out the sound of the house band. With Lapp in the group, the music assumed extra dimensions that allowed the musicians to travel all over the sonic map from roadhouse blues to Cajun fiddling to sojourns deep into experimental jazz territory. Add to it Dawson’s expansive guitar playing and — even without the considerable roster of guests — a beautiful and challenging evening of music was virtually guaranteed.

For those fortunate enough to hear the second show of the series, it didn’t take long to realize that some serious chemistry was established between the musicians during the first concert. So, by the time Dawson and company took the stage at eight o’clock on Sunday night, all of the barriers had come down, and intuition was given free rein. And while the blues — like reggae — isn’t the hardest music in the world to play from a technical standpoint, feeling is essential and something that can’t be learned from a book or a lesson. Thankfully, feeling was at a premium throughout the more than three hours of music the sold out audience was treated to — as the blues was revitalized and given new life right before their eyes and ears.

Woodstock, Dylan at Newport, Bob Marley at the Lyceum – over the years some concerts assume such mythic dimensions that they take on a life of their own that extends well beyond the event itself. Those two or three short hours on stage gain momentum with the passage of time and live on in the memories of the fortunate few who were lucky enough to be there. The Tribute to Mississippi Sheiks was just such a concert, and for those who attended the show, this DVD will fuel memories and serve as a memento to be treasured as the years pass. For those who couldn’t be there, the DVD will go a long way towards helping people share in the energy and excitement of those magical performances, and make them ruefully wonder what on earth they were doing that night that was so important that they didn’t hop a bus, train, or plane or — like Muddy Waters did when the Sheiks passed through his part of the world — walk ʻten miles to see them playʼ such ʻhigh timeʼ music.