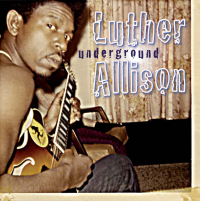 umgehend lieferbar, Bestand beim Lieferanten vorhanden
-35%
EUR 13,99**
EUR 8,99*
The discovery and release of Luther Allison's 1958 debut recording represents a blues find that surfaces with all the excitement of some long forgotten historical document. After sitting for 50 years in the home of Luther's wife, Fannie Allison, Luther's son Bernard unearthed these monumental recordings to show the music world the portrait of this artist as a young man.

"I look at this as discovering something like Robert Johnson's lost songs," said Bernard. "I think a lot of Luther's fans are going to be so amazed with what he was playing at 18. This half hour is Luther Allison raw and pure. It's the birth of what was to come. You can hear the artist portraying what he was about to do." Imagine it's 1958 and Luther Allison is 18 years old. He's playing guitar in a local Chicago blues band. The band leader, a more experienced 25 year old named Bobby Rush, had access to Wonderful Records' studio and offered Luther the opportunity to record. Unsure of himself, but with a burning intensity within, he and Bobby go in to the studio, cut songs, and cull about 30 minutes worthy to press onto a demo record. Then the record is joked about, stashed away and ignored until Luther's young son Bernard discovers the vinyl in his mother's effects. Prodigy like Ken Griffey Jr. learned their father's trade by sitting with him, absorbing lessons, and going onto the field to practice. Growing up in Peoria, Bernard's instructions from his dad Luther were condensed into one 30 minute record by Luther. This record wass Bernard's locker room.

"I learned everything note for note. When I was 12, I told him I learned guitar from this record," Bernard continued. "He told me that Underground was the first thing he ever recorded. Actually the first recording I did with Pops when I was 12. We did a live thing in Peoria, and we played "You Don't Love Me" from these recordings together. We played it exactly like the way it was on this Underground record."