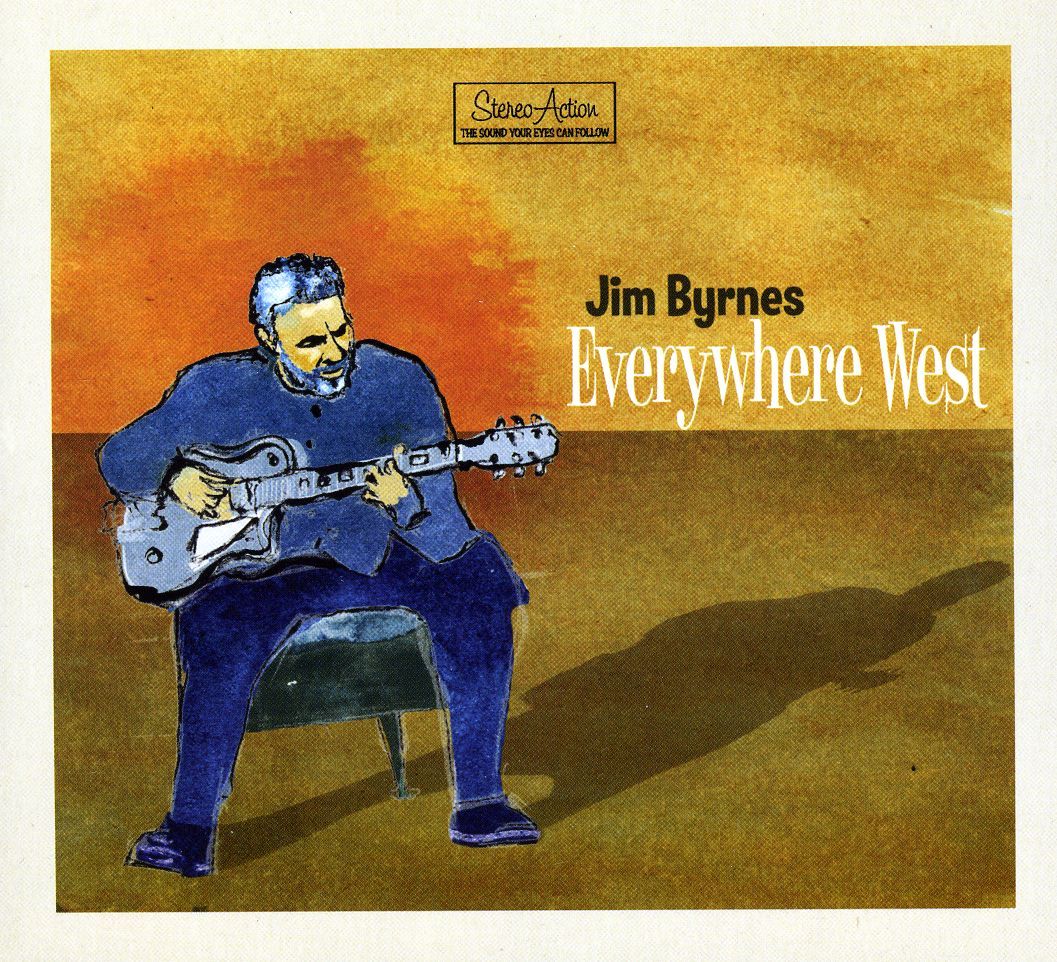 Some music simply can’t be played in the background. The first note catches you as the rest of the world melts away and you’ve got no choice but to stop what you were doing and listen. Really listen. Jim Byrnes’ new album, “Everywhere West” catches you that way. Listen closely and you can hear the wind blowing through the floorboards of long abandoned roadhouses. Wind that lifts up the dust ground down by the stomping feet of Saturday night dancers hurting, forgetting and testifying while Jimmy Reed hollered down the devil and ghosts of done me wrong romance. Open the door a little wider and some of that dust gets down your throat and all of that trapped passion and good time hurting becomes a part of you – just like the music of Jim Byrnes does.

For more than thirty years, Jim Byrnes has woven roots so deeply into the Northern Blues scene that it’s difficult to remember that this quintessentially Canadian icon was raised in St. Louis and that his instantly recognizable gruff as sandpaper, sweet as honey voice was not always an essential part of the country’s musical landscape.

“Everywhere West” marks the fourth collaboration between the multi Juno Award-winning Byrnes and musician and producer, Steve Dawson. Fans of their previous work can rest assured that the intricate acoustic melodies, dirty blues guitar, funky organ and passionate interplay that we’ve come to expect when the two men get together in the same room are here in spades. If anything, the conversation goes a little deeper this time around and the playing is more assured and trusting than it’s ever been before. Listening back to some of the tracks from the album, it’s obvious that Byrnes is thrilled with the results. “I’m not one of those guys who loves the studio. I love live performance and being out in the world, and I’ve always found the technical aspect of the studio intimidating and a little bit cold. But, with Steve, it’s so much fun making a record. It’s just a bunch of guys sitting together and playing the music we love – with the tapes rolling.”

As we’ve come to expect, the musicians who support Byrnes on this effort have been selected from the country’s best with Dawson studio regulars Keith Lowe and Geoff Hicks laying down a rock solid rhythm section while Jeanne Tolmie offers her usual heavenly back up vocals. Special guest Keith Bennett turns in some tasty harmonica parts while Canadian fiddle and horn legend, Daniel Lapp blesses listeners with some absolutely inspired performances throughout the album.

Whether Byrnes is singing a Mississippi Sheiks chestnut like “Bootlegger’s Blues” or wailing his way through a stripped down banjo driven version of Bobby Bland’s “Yield Not To Temptation”, he effortlessly inhabits every syllable and corner of this music. Testifying with a poise and authority that few can muster, he adds weight and depth to a Dave Van Ronk inspired take of “He Was a Friend of Mine”. Defined by its yearning steel guitar line, Byrnes gives new life to old pain, showing that the blues can still cut like a razor when done right. Those who think that the world doesn’t need any more done me wrong songs only need to listen to Byrne’s worried to death version of Jimmy Reed’s “Take Out Some Insurance On Me” to realize how wrong they were, while a hip shaking good time version of Memphis Slim’s “No Mail Blues” reminds listeners that hurting or not, the blues has always been first and foremost about entertainment. Three Byrnes originals round out the album – “Hot As A Pistol” – a passionate straight up blues rave, “Storm Warning” – a first take recording with some hot trumpet served up by Daniel Lapp and finally, “Me and Piney Brown” – a lovely ‘autobiographical dream tune’ that evokes an imaginary journey to Kansas City in 1938.

As Jim writes in his liner notes, “Everywhere West” is dedicated to ‘those who came before’, but this music doesn’t belong in a museum. Byrnes is a thoroughly modern bluesman who honours the past, but isn’t stuck there. The sounds and emotions he conjures are anchored somewhere beyond this moment, in timelessness with the understanding that truth is truth – whether glimpsed out the window of a speeding 1963 Valiant or delivered as an instant message to your iPhone. As Byrnes notes, “Deep down, blues is an acceptance of life. You stand in front of life and life says, ‘that’s the way it is baby’. To play the blues, you take all the bullshit that’s been piling up and you channel it through your guitar and voice. You let the pain go and turn it into a good feeling. That’s the blues – pure and simple.”

Pure and simple doesn’t get any better than this. When you hear Jim Byrnes pour his whole soul into singing a line as simple as ‘One sunny day, I’ll be home to stay’, you’ll instantly know that this is the kind of music you’re going to want to listen to forever – long after all other moods and fashions have faded away – and that sometimes time is on our side, and that nearly fifty years after first wondering ‘how blue can you get?’, Jim Byrnes has found his voice and is just hitting his stride. (blackhenmusic. com)