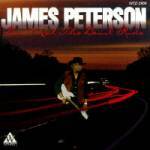 lieferbar innerhalb 1-2 Wochen
(soweit verfügbar beim Lieferanten)
EUR 17,99*
It's a warm summer night in Ybor City, Florida. The local blues club is packed to the balcony with folks looking for a "good time Saturday night." They've come to hear a local treasure. After a few songs, and seemingly out of nowhere, a blazing guitar can be heard causing heads to turn. Where is that amazing sound coming from?! The star of the show, James Peterson, comes in the front door, never missing a riff while making his way to the stage.

Looking every inch the bluesman, his broad smile reveals two gold teeth adorned with raised gold letters "JP," followed by a star. He surveys the crowd, playfully demanding to know if "everyone is alright" and "are we gonna have a good time tonight?" Yeeaahh!! James Peterson, with his own hotter-than-a-firecracker combination of playing and singing the blues, definitely knows how to have a good time.

A native of Russel County, Alabama, Peterson was born in 1937 to a farming family. His first lessons in the blues came from the wonderful sounds drifting out of the little juke joint run by his father. It was these sounds that filled the air late into the night. He bought his first guitar at age fifteen, and after teaching himself how to play, took the route many before him had chosen. He headed north to Chicago, where he began singing with John Scott's band.

In 1965, Peterson opened "The Governor's Inn, House of Blues," in Buffalo, New York. This allowed him to pursue his love of the blues, while keeping his family close to him. His band served as the house band, backing such blues luminaries as Howlin' Wolf, Big Joe Turner, and Freddie King, Koko Taylor and Lowell Fulson. Peterson's first album, "The Father, Song and the Blues," produced and co-written with the legendary Willie Dixon, also featured his then five year old son, blues great Lucky Peterson. Three more albums followed on various record labels, all serving as stepping stones to number five. Destined to propel James Peterson further into the blues spotlight, "Don't Let The Devil Ride," is his first release on Waldoxy Records.