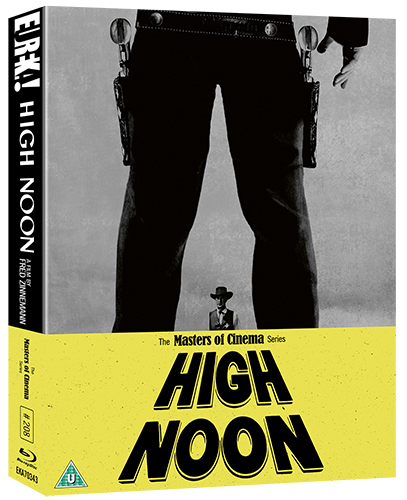 One of the most treasured Hollywood classics, and one of the most influential and iconic Westerns ever made, High Noon remains a powerful study of heroism, and the tension between the individual and the society around him. One of the best films by director Fred Zinnemann (From Here to Eternity) — and produced by Stanley Kramer — High Noon is riveting entertainment and an acknowledged American masterpiece, yet one with surprisingly tumultuous roots.

In his Oscar-winning performance, Gary Cooper stars as small town Marshal Will Kane, preparing to retire and leave town with his young bride Amy (Grace Kelly). However, plans are derailed with the impending arrival of outlaw Frank and his brutal gang. Unfolding in real time, High Noon follows Will as he futilely tries to assemble a posse with the reluctant townspeople, who want Will to forget about a conflict — as does Amy, a Quaker pacifist who just wants to avoid violence. But as high noon approaches, Will realises he must do the moral thing…with or without help.

While the film has become a favourite of U. S. presidents from Eisenhower and Reagan to Clinton, its release was controversial: John Wayne (who had turned down the role) and Howard Hawks hated it, precisely because it was viewed as a thinly veiled allegory for the House Un-American Activities Committee hearings investigating communism at the time. Its politics make it even more intriguing now, but regardless, High Noon is one of the most important — and gripping films — of the 1950s.

Limited Edition Hardbound Slipcase
A LIMITED EDITION 100-PAGE Collector’s book featuring new writing on the film; the original short story The Tin Star by John W. Cunningham; excerpts from writings and interviews with director Fred Zinnemann; archival articles and materials relating to the film
4K Digital Restoration
Optional English subtitles for the deaf and hard-of-hearing
Brand new and exclusive audio commentary by historian Glenn Frankel, author of High Noon: The Hollywood Blacklist and the Making of an American Classic
Brand new and exclusive audio commentary by western authority Stephen Prince
New video interview with film historian Neil Sinyard, author of Fred Zinnemann: Films of Character and Conscience
A 1969 audio interview with writer Carl Foreman from the National Film Theatre in London
The Making of ‘High Noon’ [22 mins]– a documentary on the making of the film Inside ‘High Noon’ [47 mins] and Behind ‘High Noon’ [10 mins] – two video pieces on the making and context of the film
Theatrical Trailer