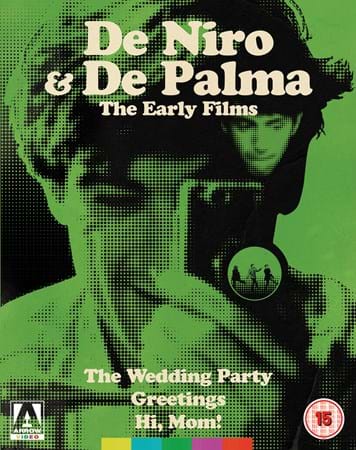 In 1963, Robert De Niro stepped in front of a movie camera for the first time. The resulting film, a low-budget black and white comedy called The Wedding Party, would take three years to complete, and another three years to be released, but it would also establish a hugely important working relationship for the aspiring actor. One of the filmmakers, long before he became synonymous with suspense thanks to Carrie, Dressed to Kill and other classics, was Brian De Palma. He and De Niro would team up again in the next few years for two more comedies, both with a countercultural bent.

Greetings, the first to receive an X certificate in the United States, is a freewheeling satire focusing on a trio of twentysomething friends – a conspiracy theorist, a filmmaker, and a voyeur played by De Niro – as they try to avoid the Vietnam War draft. Hi, Mom!, originally named Son of Greetings, returns to De Niro’s voyeur, now an aspiring maker of adult films, for another humorous glimpse at late-sixties society, this time turning its attentions to experimental theatre, cinéma vérité, the African American experience, and the white middle classes.

Brought together for the first time – and each newly restored by Arrow Films especially for this release – these three films offer a fascinating insight into the early careers of two American cinema’s major talents.