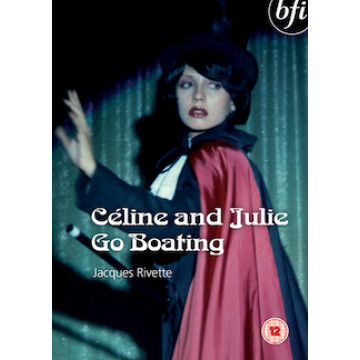 Rivette's rarely seen yet biggest commercial hit, is an exhilarating combination of the themes of theatricality, paranoia and la vie parisienne, all wrapped up in an extended and entrancing examination of the nature of filmmaking, and film-watching.

Celine (Juliet Berto), a magician, and Julie (Dominique Labourier), a librarian, meet in Montmartre and wind up sharing the same flat, bed, fiance, clothes, identity and imagination. Soon, thanks to a magic sweet, they find themselves spectators, then participants, in a Henry James-inspired 'film-within-the film', a melodrama unfolding in a mysterious suburban house with the 'Phantom Ladies Over Paris' (Bulle Ogier and Marie-France Pisier), a sinister man (Barbet Shroeder) and his child. The atmosphere, however, is more Lewis Carroll, with Juliet Berto and Dominique Labourier as twin Alices. The four main actresses improvised their own dialogue in collaboration with Rivette and scriptwriter Eduardo de Gregorio.